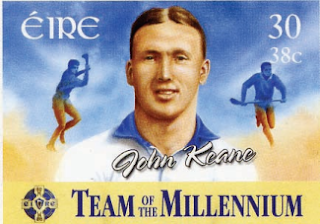 From 1937 to 1949 he wore the blue jersey of Munster with distinction. In 1937 Waterford played Limerick in the Munster Senior Hurling championship and a youthful Keane put the shackles on Mick Mackey from the centre-back spot. Old timers told us that this was John Keane's finest hour. From 1938 to 1951 Keane the great won eight County Senior Championship medals with Mount Sion. He was club captain from 1941 to 1951 and was leader of the Decies in seven Munster championship campaigns. The year 1948 saw Waterford crowned as All-Ireland Senior Hurling champions for the first time when they defeated Dublin by 6-7 to 4-2. At club level John won two County Minor Hurling medals, one County Junior Hurling medal and two County Junior Football  medals. In 1948 he won a Munster Junior Football medal. Six Railway Cup hurling medals were also included in the Keane collection. A remarkable record from a hurler and sportsman who can take his place in the all time greats Roll of Honour.
Posted by Christy Callanan