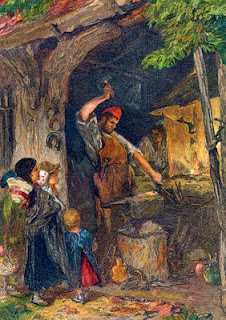 Under the spreading chestnut tree
The village smith stands;
The smith, a mighty man is he,
With large and sinewy hands;
And the muscles of his brawny arms
Are strong as iron bands.

His hair is crisp, and black, and long;
His face is like the tan;
His brow is wet with honest sweat,
He earns whate'er he can,
And looks the whole world in the face,
For he owes not any man.

Week in, week out, from morn till night,
You can hear his bellows blow;
You can hear him swing his heavy sledge,
With measured beat and slow,
Like a sexton ringing the village bell,
When the evening sun is low.

And children coming home from school
Look in at the open door;
They love to see the flaming forge,
And hear the bellows roar,
And catch the burning sparks that fly
Like chaff from the threshing floor.

He goes on Sunday to the church,
And sits among his boys;
He hears the clergy pray and preach,
He hears his daughter's voice
Singing in the village choir,
And it makes his heart rejoice.

It sounds to him like her mother's voice,
Singing in Paradise!
He needs must think of her once more,
How in the grave she lies;
And with his hard, rough hand he wipes
A tear out of his eyes.

Toiling — rejoicing — sorrowing,
Onward through life he goes;
Each morning sees some task begun,
Each evening sees its close;
Something attempted, something done,
Has earned a night's repose.

Thanks, thanks to thee, my worthy friend,
For the lesson thou hast taught!
Thus on the flaming forge of life
Our fortunes must be wrought;
Thus on its sounding anvil shaped
Each burning deed and thought.

The Sinking of the Lusitania

The Lusitania was a 31,500 tons Cunard Atlantic liner brought under the control of the British Admiralty during World War 1. On May 7th,1915, it was bound for England from the USA, with 1,255 passengers and 651 crew on board, when it was torpedoed and sunk by a German submarine off the Old Head of Kinsale, Co.Cork, Ireland. Two torpedoes were fired, the ship sank within 20 minutes, and 1,198 people were drowned, including 124 Americans. The incident horrified most of the world, caused serious anti-German rioting in London, and may have helped eventually to bring the USA into the war. In Germany a commemorative medal was struck.
Posted by Christy Callanan No comments:

Email ThisBlogThis!Share to TwitterShare to FacebookShare to Pinterest
Labels: History

We are asked officially to give the utmost publicity to the following document, signed by P.H. Pearse, who was described as being "The leader of the rebels" and bearing date 29th:-

"In order to prevent further slaughter of unarmed people, and in the hope of saving the lives of our followers, now surrounded and hopelessly outnumbered, members of the Provisional Government present at headquarters have agreed to an unconditional surrender, and the commander of all units of the Republican Force will order their followers to lay down their arms".

The Co-Inspector also published on April 30th an announcement that "James Connolly and other Sinn Fein leaders have unconditionally surrendered to the General Officer Commanding-in-Chief in Ireland".

In a communication posted at Ballymun R.I.C. station on the evening of 29th April intimating, on behalf of the Irish command, the progress of military operations in the city, it was stated that "Roger Casement has declared that Germany has sent all the assistance she is going to send which assistance is now at the bottom of the sea".