The following news item is taken from the Nationalist Newspaper, Clonmel, Co. Tipperary, published on 10th May 1916 (Easter Week) and reproduced in the 'Nationalist' dated March 31st 2016: 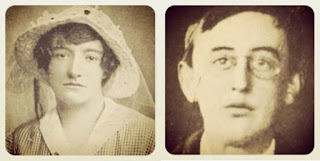 A pathetic incident has to be recorded in connection with the execution of Mr. Joseph Plunkett, one of the insurgent leaders, who was shot Thursday morning in accordance with the sentence of the Court Martial.

On Wednesday evening an attractive looking young lady entered Mr. Stoker's jewellery establishment, 22 Grafton Street, and said she wished to purchase a wedding ring. Mr. Stoker, observing that she seemed to be labouring under strong emotion, expressed the hope that she was not in any trouble. The young lady, who made a gallant attempt to preserve her composure, replied that she was the fiancée of Mr. Plunkett, who was to be shot the following morning, and her marriage to him was to take place the day before his death.

Mr. Stoker, who was thunderstruck by such a startling statement, expressed his deep sympathy, and the young lady, having quietly thanked him, selected a ring and departed.

The 'Irish Times' of Thursday contained the following announcement:
PLUNKETT and GIFFORD — May 3rd.,1916, at Dublin, Joseph Plunkett to Grace Gifford.

The following is taken from The Evening Herald Newspaper of Tuesday, April 12, 1966 in recasting the events surrounding Easter Week, 1916, in particular the views of John Redmond M.P., leader of the Irish Parliamentary Party and champion of Home Rule:

In a statement with regard to the Dublin events, Mr. J. Redmond M.P. says his first feeling on hearing of the insane movement was one of horror, discouragement, and almost despair. He asked himself was the insanity of a small section once again to turn all of Ireland's recent marvellous victories into irreparable defeat, sending her back into another long night of slavery, suffering, and struggle.

After a reference to Ireland's choice when the war came, and the sufferings of small nationalities at the hands of Germany, he asked: "is there a sane man in Ireland who does not see this (hostility to the cause of the Allies) meant the drowning of the newly-won liberties of Ireland in Irish blood? Be these views right or wrong, this was the view of the overwhelming majority of the Irish people; it was the opinion which thousands of Irish soldiers have sealed with their blood by dying in the cause of the liberty of Ireland and of the world.

"Surely I need not argue the principle, especially with anybody who professes himself to be a Home Ruler, that the policy of Ireland must be decided by Ireland herself. That doctrine has been contested only by the very same men who today have tried to make Ireland the cat's paw of Germany. In all our long and successful struggle to obtain Home Rule we have been thwarted and opposed by the same section. We have won Home Rule not through them, but in spite of them. This wicked move of theirs was their last blow at Home Rule".

He says that this blow was plotted, organised, and paid for by Germany, and was a German invasion of Ireland as brutal and cynical as that of Belgium. Misguided and insane young Irishmen rushed and lost their lives, while those who sent them into that insane anti-patriotic movement remained safely in America.

The Pascal Fire of Patrick

On Tara's hill the daylight dies,
On Tara's plain 'tis dead.
"Till Baal's unkindled fires shall rise
No fire must flame instead".

'Tis thus the king, commanding, speaks,
Commands and speaks in vain;
For lo! a fire defiant breaks
From out the woods of Slane.

For there, in prayer, is Patrick bent,
With Christ his soul is knit;
And there, before his simple tent,
The Pascal fire is lit.

"What means this flame that through the night
illumines all the vale?
What rebel hand a fire dare light
Before the fires of Baal?"

"O King! when Baal's dark reign is o'er,
When thou thyself art gone,
This fire will light the Irish shore
And lead its people on;

Will lead them on full many a night
Through which they're doomed to go,
Like that which led the Israelite
From bondage and from woe.

This fire, this sacred fire of God,
Young hearts shall bear afar
To lands no human foot hath trod,
Beneath the Western Star;

To lands where Faith's bright flag unfurled
By those who here have knelt
Shall give unto a newer world
The sceptre of the Celt".