Yes Virginia, there is a Santa Claus

An 1897 editorial by Francis P. Church in the New York Sun became one of the most popular ever written. It was written in response to a letter the paper received from an eight-year old girl seeking assurance that Santa Claus existed. The girl's name was Virginia O'Hanlon and I will show her letter hereunder:-

I am 8 years old. Some of my little friends say there is no Santa Claus. Papa says,"If you see it in The Sun, it's so". Please tell me the truth. Is there a Santa Claus? 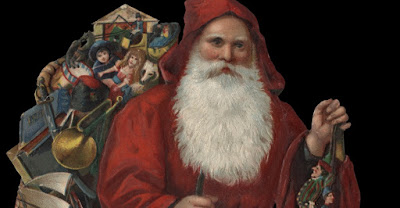 I will quote some of Mr.Church's response:


...Yes, Virginia, there is a Santa Claus. He exists as certainly as love and generosity and devotion exist, and you know that they abound and give to your life it's highest beauty and joy. Alas! How dreary would be the world if there was no Santa Claus! It would be as dreary as if there were no Virginia's! There would be no childlike faith then, no poetry, no romance to make tolerable this existence. We should have no enjoyment, except in sense and sight. The eternal light with which childhood fills the world would be extinguished...

....No Santa Claus! Thank God! He lives and lives for ever. A thousand years from now, Virginia, nay 10 times 10,000 years from now, he will continue to make glad the heart of childhood

Virginia O'Hanlon, with her masters degree in education, was a teacher for 47 years when she retired. Virginia O'Hanlon Douglas died on May 13th 1971, at the age of 81, in a nursing home in New York.
Posted by Christy Callanan