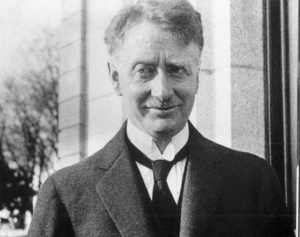 William T. Cosgrave (1880—1965) was President of Cumann na nGaedheal and the first President of the Irish Free State. He became leader of a country devastated by the struggle for Independence followed by an insane Civil War when primeval instincts decided that violence was the only answer to political differences. Nevertheless, great progress was achieved by Cosgrave's government during this turbulent period.

Minister for Agriculture, Patrick Hogan, introduced the 1923 Land Act (and its amended form in 1925) which completed the transfer of land from landlords to tenants while empowering the Land Commission to acquire untenanted land both inside and outside the 'Congested Districts' for the relief of distress in these areas of the South and West. Hogan also pushed through a vigorous series of acts between 1924 and 1930 aimed at improving the marketing and breeding of livestock, insisting on improved standards of cleanliness, packing, marking and an honest description of the quality of meat produce. The most radical innovation in Agriculture was the decision to make loans available to farmers on reasonable terms and to this end the Agricultural Credit Corporation (ACC) was set up by the government in 1927.

The first sugar factory was established in Carlow by the Cosgrave Government and it was easily the best and most efficient as time was to prove. The most spectacular achievement was the Shannon Scheme begun in 1925 and the establishment of the Electricity Supply Board (ESB) in 1927 even though conventional business opinion of the time told him it was mad to attempt such ventures. The Shannon Scheme has been described as 'a gigantic undertaking for an impoverished country'.

William T. Cosgrave died on 16th November 1965, fifty years ago tomorrow. He was born on June 6th 1880. A man who believed in neighbourliness, he went out of his way to appoint Protestants to the Senate at a time when they might have felt very unwelcome in the new State. He did his best to normalise relations with Britain when he could have won cheap votes by stocking up anti-British sentiments as self-styled "republicans" were apt to do. The same mentality prevails at present from the relics of terrorism and their boot-lickers when favourable comment towards Unionists is dubbed as traitorous. I have no doubt that if the attitude of Cosgrave and his colleagues had prevailed in this regard, we would have achieved a unified country decades ago in which terrorists and anarchists would have been sidelined.

Certainly we have nothing to be proud of in the way we have treated the memory of William T. Cosgrave. A stranger could well ask if we have no sense of national pride. Do we turn our backs on our real heroes, preferring instead the easy versifier or failed revolutionary? Although he came from the opposite side of the political divide, Sean Lemass was eloquent in his admiration for the lasting achievements of W.T. Cosgrave. In many ways Lemass and Cosgrave were the same sort of men.

We have had few enough great men without ignoring those who are most deserving of this accolade.
Posted by Christy Callanan