The newly-elected Northern Parliament's first sitting was marked by scenes inside and outside the House. While heated exchanges were going on between Mr. Midgley, ex Minister of Labour, and Mr Beattie, 10,000 aircraft workers were demonstrating at the main gate of Stormont against the growing threat of unemployment.

"Éire had not come into the war in 1940 because a United Ireland apparently took second place to neutrality, and in any case the people of the south felt that the "British Chicken" was about to have its neck wrung", said Sir Basil Brooke in the Northern Commons.

Mr. H. Diamond (Republican-Socialist) said Northern Nationalists and Republicans had submitted a defence plan for the whole of Ireland which had been ignored by the British and Northern governments. The attitude of the Unionist Party was an invitation to any foreign power to attack Ireland, North or South.

Following one of the most sensational elections in British history, Mr. Churchill last night resigned office and King George asked Mr. Attlee, leader of the Labour Party which swept the country, to form a government. The Conservative Party suffered one of its biggest defeats and Labour, in office for the third time, had an overall majority. A large number of Mr.Churchill's Ministers were defeated, and he himself was elected in a new constituency.

The death has occurred in Dublin of Mrs. Kitty Cronin wife of Major-General Felix Cronin and formerly Miss Kitty Kiernan of Granard. She was the fiancee of General Michael Collins at the time of his death. She leaves two sons, Felix and Michael Cronin.
Posted by Christy Callanan No comments: 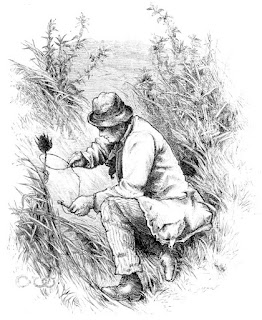 I hear a sudden cry of pain!
There is a rabbit in a snare:
Now I hear the cry again,
But I cannot tell from where.

But I cannot tell from where
He is calling out for aid!
Crying on the frightened air,
Making everything afraid!

Making everything afraid!
Wrinkling up his little face!
As he cries again for aid;
— And I cannot find the place!

And I cannot find the place
Where his paw is in the snare!
Little One! Oh, Little One!
I am searching everywhere!

Today, 15th of July, is St. Swithin's Day. Swithin, or Swithon, was bishop of Winchester from 852 until his death in 862, and the cathedral in the town was dedicated to him. There is a popular superstition that rain on this day presages rain for 40 succeeding days. This belief is thought to have originated in the fact that the removal of his body from the church-yard, where it had been interred, to the cathedral interior on July 15th 971, was delayed by heavy rain.
Posted by Christy Callanan No comments:

The week-end just gone was a very successful one for Tipperary GAA teams. The most amazing result was that achieved by the senior footballers against Louth at Semple Stadium on Saturday. It was not surprising that they won, but the margin of victory against a traditional football county — who themselves had put up a big score when beating Leitrim in the previous round — leaves one stuck for words. It shows that the nucleus of a 'top-eight' football team is there. The county is lucky to have a great group of mentors involved with the team, composed of some born within the county, and others who, thankfully, have come to work and live here. There is another plus in the fact that as well as the Football Board, the present county chairman and county secretary are very positive towards football, as well as hurling, in the county.

The Munster Senior Hurling final reminded me of a tug-of-war contest with the little white band in the middle going one way and then the other until a final 'heave' brought it over the line. The final 'heave' in this case was provided by a few Tipperary forwards like John O'Dwyer — whose wrist work is poetry in-motion — Jason Forde and Nial O'Meara, who were capable of picking of points that the Waterford forwards were unable to emulate. There was some fine individual skill shown by players on both sides, there was also a lot of 'ping-pong' play, with a loose back on one side driving the ball into the other half where a loose back on the other side collected it. Tipperary will need to sharpen up in certain areas if they hope to attain the much sought-after All-Ireland. Their passing of the ball via hand or hurley left a lot to be desired yesterday. Their propensity to tackle an opponent with the arm, or hurley, around him continues to be a problem for them.

The minor hurlers achieved a great victory when beating a Limerick team going for three Munster titles in a row. They have struggled a bit to all their wins to date — often the pathway to All-Ireland glory! The best of luck to them.
Posted by Christy Callanan No comments: